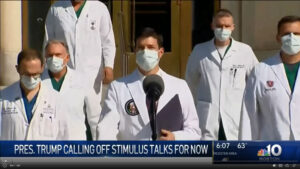 Dr. Foley was interviewed by Kristy Lee of NBC 10 Boston on October 6, 2020 to discuss the differences between MDs and DOs. The interview materialized as a result of the criticism of President Trump’s doctor, Sean Conely DO, including rhetoric that he was not a “real” doctor because he was not an MD. For those not aware of what has occurred in the past week, POTUS was diagnosed with COVID-19; his personal physician Sean Conley, DO, had to speak at some press conferences; and non-medical people are critiquing the content, details and delivery of that protected health information by airing false information about his credentials and the osteopathic profession on television and social media outlets. Dr. Foley spoke with NBC to set the record straight.