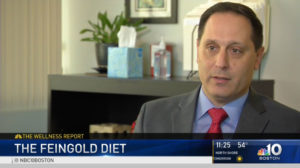 “The Feingold Diet is not for losing weight but for gaining control of erratic behavior. The diet claims to help people who suffer from ADHD by eliminating foods that contain artificial dyes and preservatives. Sandy Boomkirk started using the Feingold diet for her daughter Hadley when she was eight. Boomkirk says the improvements started about a month into the diet and helps her daughter control her ADHD symptoms. The diet requires commitment of time and money to buy natural foods, but not everyone is sold on it. There is limited research on it. Some either dismiss it or tweak it, but it’s a winning recipe for families who have seen results.”

See the full story at NBCBoston.com