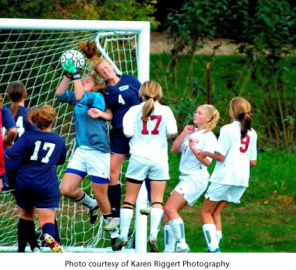 In 1874, Andrew Taylor Still, MD, the founder of osteopathy recognized that health manifests itself when all parts of the body are in balance and function as a synchronized whole. He also knew that the body has the ability to heal itself. But there are circumstances, such as trauma from a car accident or sports injury when the body can become overwhelmed, causing a disruption in this self-healing capacity. As we will see with concussion, even small changes in the body can have big effects on health.

A concussion is a type of traumatic brain injury (TBI) caused by either a direct blow to the head or by indirect forces transmitted to the head by an impact to another region of the body. Sports related concussion is highly publicized, but other causes include vehicle related accidents, falls, assault, and explosive blasts or other combat injuries. An estimated 1.6 -3.8 million concussions occur in the U.S. each year.

Concussions can cause a broad range of physical and psychological effects. Some symptoms may appear immediately after the trauma, while others may be delayed, appearing days or weeks later. The effects of a concussion can impact the whole person, including school and work performance, the ability to complete everyday tasks and make decisions, as well as to interact socially and maintain healthy relationships.

A concussion is diagnosed based on a patient’s history of injury and symptoms. Although there have been advances in technology, standard imaging studies available at most hospitals, such as CT scan and MRI cannot diagnose a concussion. The diagnosis of concussion is often delayed because the symptoms may not be immediately obvious and because it can be overshadowed by other injuries. When more than one area is injured, the most painful region or potentially worrisome issue usually receives the first and most attention. For example, a soccer player slams into the goal post with her outstretched leg and falls backwards onto the ground. She has what appears to be a possible fracture to her leg. She is taken to the emergency room where the focus is on diagnosing and treating the fracture. The next day she has a headache, feels foggy and dizzy. Another example is what can happen during a low speed fender bender. The driver of a car rear-ended by another vehicle declines medical attention at the accident scene because he wasn’t experiencing any pain. But later that day, he develops minor neck stiffness, followed by balance issues, trouble thinking clearly and a headache.

Recovery from a concussion is highly variable. For some it takes days, while for others symptoms can last weeks, months or longer. Recovery is often prolonged in children and teenagers as well as people with a history of learning disorders, depression, migraine headaches, sleep disorders and those who have had a concussion in the past.  After sustaining one concussion a person is more vulnerable to sustaining a subsequent concussion.  OMT has been shown to reduce symptoms often associated with concussion which may allow a person to more rapidly return to their normal activities.

Centers for Disease Control and Prevention

Fraix M, Gordon A, Graham V, et al. A use of the SMART balance master to quantify the effects of osteopathic manipulative treatment in patients with dizziness. J Am Osteopath Assoc. 2011;113(5):394-403.