“When a rock is dropped to the bottom of a lake it not only disrupts the column of water through which it falls, but it also alters the dynamics of the entire body of water. Similarly, trauma, typically a directed force, not only disrupts or distorts the human body along the path of impact, but potentially alters the dynamics of the entire organism.” J. Alexander, DO1 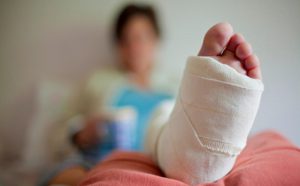 In the 1870s, Andrew Taylor Still, MD recognized health can occur only when all of the parts of the body are in balance and function as a synchronized whole. Dr. Still knew of the innate wisdom of the body to heal itself. However, when trauma occurs the body can be overwhelmed in such a way “that exceeds its ability to immediately return to its normal orientation and function.”2

Trauma to one area of the body can have far reaching effects, causing not only musculoskeletal injury, but disturbances in endocrine, cardiac, vascular, respiratory, digestive, and immune function as well.  Even small alterations in structure and function can influence the health of the whole person.For example, a concussion is a traumatic injury that can affect the intimate relationships of the cranial bones, cranial nerves, lymphatics, blood vessels and brain, and illustrates how an event can produce a wide variety of systemic symptoms, such as nausea, dizziness, insomnia and fatigue. Another example is an ankle sprain that appears to be a localized injury, but as a result of swelling, soft tissue injury and altered joint mechanics can lead to changes in walking gait (subtle or gross). This can subsequently manifest into issues such as hip and low back pain and improper breathing mechanics, causing impaired lymphatic flow leading to a cyclical effect of ongoing swelling at the injured joint, delayed healing and increased risk of re-injury.

Osteopathic manual medicine (OMM) may be helpful after an injury to reestablish these important relationships and allow the body to return to normal function. Osteopathic physicians (DOs) are trained to identify and interface with subtle changes in the body, including bones, tissues and fluids. Osteopathic manual medicine (OMM), including Cranial Osteopathy may help facilitate recovery from concussive symptoms, contusions, acute and chronic pain from fractures, sprains and strains as well as systemic symptoms related to trauma. The doctors at Boston Osteopathic Health are experienced at treating pain and dysfunction associated with traumatic injury.

Doctors of Osteopathy (DOs), historically referred to as Osteopaths, complete 4 years of medical school followed by post-graduate residency training. In addition, some complete specialty fellowships. Osteopathic physicians (DOs) receive extensive training in the use of their hands to treat patients based on the teachings of Dr. Still, as well as develop knowledge of modern medical diagnostics and treatment. Osteopathic physicians (DOs) and MDs educated in the U.S. are the only physicians fully trained and licensed to practice the entire scope of medicine.

What can I expect with Osteopathic Manual Medicine (OMM)?